What impact does misinformation have on society, and what are the best ways to combat it?

In recent years, “fake news” has been a dominant theme in our society, and indeed we can observe a constant flow of misinformation being disseminated through different forms of media. In the last decade, research conducted in our lab has estimated the impact of misinformation presented in the news as well as the best ways to fight this type of misinformation. We are also interested in how scientific misinformation is revised and the psychological dynamic underlying conspiracy beliefs. One current project involves developing methods to have communities correct misinformation, whereas another seeks to understand how conspiracy beliefs are created.

Misinformation is easy to inject but hard to correct. Now we also know how much harder.

To correct misinformation, keep it short.

Our research has found that detailed corrections, often seen as potentially effective, have less impact than succinct ones. The reason appears to be that the detailed ones remind audiences of the misinformation itself, which only serves to reinforce its impact.

It has come to be conventional wisdom that social media, particularly the like minded groups gathering there, is behind many people’s reluctance to vaccinate themselves. We asked ourselves, “Do people who oppose vaccines seek out groups that feel similarly? Or, do people who join these groups by accident later learn to oppose vaccines?

At the Annenberg Public Policy Center, we surveyed about 3,000 Americans over the course of a year, and our lab gathered tweets about vaccines. We found that in locations where many tweets centered around vaccine fraud, big pharma, and children, people in those counties were less likely to get a flu shot in the months to come. However, this association was absent when people had discussions about vaccines with family and friends. We thus learned that discussions with family and friends can debunk misconceptions and that, in their absence, social media misconceptions and misinformation can lead to a decline in flu vaccination.

Trusting in science can make people susceptible to misinformation.

Typically, instilling trust in science is touted as a means to combat beliefs in fake news and conspiracy theories. What we found, however, is that often misinformation uses the language and style of real science to make a counterfactual case. Ironically, a belief in science makes people susceptible to pseudoscience. Fortunately, we also found that inducing a critical evaluation mindset reduces the impact of all misinformation: pseudoscientific and more obvious misconceptions. Learn more. 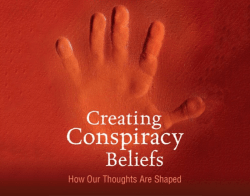 More on the Book