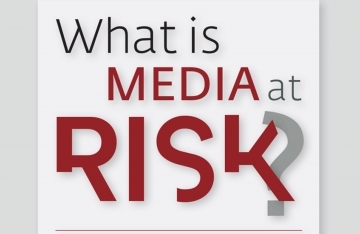 "What is Media at Risk?"

The event has ended, but is available to watch on YouTube:

"What is Media at Risk?" is a cross-disciplinary conference bringing together media practitioners, media scholars, and media assist organizations to define what "media at risk" means globally in circumstances of political intimidation and what can be done to resist it. Given the proliferating nature of creeping authoritarianism around the world, these efforts will help highlight Penn’s mission to explain more fully what political intimidation in the media — in documentary, journalism, entertainment, and the digital environment — looks like worldwide.

We are in unchartered waters. Political intimidation threatens media practitioners worldwide, and disinformation campaigns destabilize public trust. The Center for Media at Risk offers the chance to strategize in response to threatening political conditions. Knowing how media practitioners in documentary, journalism, entertainment, and the digital environment work under political threat—and how they can resist its impact — helps save the media.