The author and journalist encouraged students to lean in to the adaptability they showed during the pandemic and embrace the continually-changing media landscape.

On May 15, following an introduction from graduating senior Sabrina Elson (C'22), author and journalist Jo Piazza (C'02) delivered the 2022 commencement address for Annenberg's Communication Major Graduation Ceremony, held at the Zellerbach Theater of the Annenberg Center for the Performing Arts.

Please watch the video by clicking the play button above. The full text is as follows:

Whew. This is my first time wearing heels in three years, so I'm really proud I just made it to the podium.

Hi everyone! It is so nice to be here in person and not on a screen. I could not even tell you how excited I was to put on pants this morning, because if this had been on a Zoom, I don't know if I would have made it there.

You all look completely amazing, given everything you've been through for the past two years, and I want to start this speech out by saying you are all rockstars. You really are. I know that everyone else has been saying it, but you deserve to hear it as many times as possible today.

Yes, yes give them all the applause. Thank you. Because I don't know that we can acknowledge enough the craziness of these two years, and how you all have been through a complete and utter dumpster fire and come out of it smelling like roses. So good for you. So no more applause needed, but yay you guys.

And now that we’ve done the obligatory thing of acknowledging the weirdness of the past two years, which we all must do over and over again because it's part of polite conversation now, I think now we all just have to accept it and move forward. Because that's what you guys are going to do after today.

And this is not the end. Not even a little.

Right now, this moment is just the beginning of your stories.

And I know a little bit about the beginnings of stories. As you heard in my beautiful, beautiful introduction, I’ve written ten books. Some of them were great, some of them were meh. But all of them have a beginning.

And if I have learned anything, it's that the beginning of the story that is the hardest to write, because you have a blank page. And the blank page is terrifying! But you guys already have your first chapter. It's written for you. It's right there.

Now, I know a little something about starting your adult life off with what feels like the world is ending.

My defining moment when I was graduating 20 years ago, which seems crazy to say, was 9/11. And I know, don't bring up deadly national tragedy in a graduation speech. You guys should just cancel me right now.

I was right here when it happened. I was in this building, in class, in Annenberg, when the first plane crashed into the tower and that year, we all thought that the world was ending.

I covered the impact of that day for The Daily Pennsylvanian, which had a huge impact on my career. It's what made me know that I wanted to be a journalist. And then my first byline appeared in the New York Times in October of 2001.

That's when I finally saw exactly how much reporting meant to people. It’s the moment where I knew I would be a journalist for the rest of my life. And when I left Penn many, many, many years ago, I assumed that I would be in print journalism forever. That was a thing 20 years ago, you're like, "Newspapers, magazines, oh my gosh. So much fun."

Why would I have assumed any different? I thought that career would last forever. It was 2002. But then this little thing called the Internet blew it all up. And five years later, social media did the same thing. And now media as we know it transforms once a month. There's always going to be a new app or a new platform to adapt to. You can choose to fight against all the new technology or you can master it, as all of you already have, and use the hell out of it.

And I know that you're going to choose the latter.

My introduction earlier, which, again, was very beautiful, so complimentary, sounds really impressive, but half of those companies that I worked for — half the magazines, the newspapers — they aren't even around any more. And if they are, they are something totally different from when I worked there.

I’ve had at least ten different careers since I graduated. I wrote one of the first blogs for the New York Daily News and I remember the old white men smoking cigarettes in the newsroom — you could smoke in newsrooms back then. It was crazy — saying the Internet was a blip and nothing was going to change, and all of those men were out of a job in the next five years and they never worked in journalism again. That is not going to happen to you because you are going into the world with your eyes wide open. You are resilient and completely ready for change.

The world moves pretty fast. Yeah, I just quoted Ferris Bueller, even though I know you weren’t born when that wonderful, wonderful film came out. But your parents were, and I'm sure they loved it as much as I did.

It does move pretty fast. But you already experienced that during your time here.

But if I can tell you one thing that I have learned working in media for the past 20 years, it is that you get to choose how all of this adversity, all of this madness — how it defines you.

Because all of this adversity is going to make you stronger and more adaptable. You can choose to dive headfirst into that dumpster fire and do everything you can to put it out.

And as I've heard from all of the awards you've already won, most of you have already done that. You've been taking to the streets, shooting photographs, telling stories. You're already so many steps ahead of where I was when I graduated from college.

And the important thing is that adversity just makes us more interesting.

Every day I think about something that the great Nora Ephron said, which is, ”Everything is copy.” Every good thing, every bad thing. Everything that happens to you. It’s all part of your story. And I have no doubt that each of you can adapt in the space of a single Tiktok.

And that's going to be so incredibly useful because there is no industry, and no field that is changing faster right now than the world of communication.

Now I know that I'm supposed to end this speech with tidbits of advice. Kurt Vonnegut and his big graduation speech about the wisdom of sunscreen really set the bar for that one. But another fun story really quick before I give you all of my words of wisdom: Kurt Vonnegut once spilled a martini on me at a very fancy event I was covering for the New York Daily News when I was a gossip columnist, and I didn’t wash that skirt for like five years. They say never meet your heroes but that’s ridiculous. Because you want your heroes to spill a martini on you because then you have the greatest cocktail story of all time.

So here's my advice:

Be kind to all of the people who are working with you at your level in an organization because those are the people who will hire you one day. Your boss will be a distant memory and your colleagues are the ones who are going to support you for the rest of your life if you treat them well.

My first intern is now the editor at Harpers Bazaar magazine and she is the one who hires me to do wonderful things all the time. I am so happy that I was nice to her.

Put your trust in people not in corporations, because it is the people and your colleagues who you can call when your company dissolves, or falls apart, or gets bought by a multimedia conglomeration that only has letters in its name.

I learned this because I was out of a job at Yahoo while I was climbing Mt. Kilimanjaro on assignment on my honeymoon and they sent me a text to let me know that Yahoo was no longer a company.

Be bold and brave and laugh at yourself. When you go to a restaurant, always tell the waiter that it’s someone’s birthday because it’s just nice when someone brings you a cake and sings to you. Create joy in weird little pockets of your life because if you do not create it for yourself then you cannot expect the world to give it to you.

Also tip well, because everything is hard work.

Take that absurd job in your twenties. The one that your parents think is ridiculous and they don't know how to explain to their friends. I became a gossip columnist in New York City because it was the only job I could get in journalism in New York City. I knew nothing about celebrities.

On my first night on the job, I talked to this wonderful man for an hour, and I did not recognize that he was Jay-Z. When I got to the office the next day, I was asked what I was going to write about, about Jay-Z. And I said "I don't know. We just had this mindblowing conversation about modern feminist theory" and somehow I didn’t get his name or get any of it on recording. But they let me keep being a gossip reporter, and they'll let you keep doing all of the absurd jobs. Because those are the ones that are the most fun, and they are the ones that will help you become who you are going to be when you are my age, in your 40s and giving a speech to beautiful graduates just like you.

You'll probably have nine different careers. No one is going to have just one anymore. And that is totally okay. Each of them will surprise you and they'll make life more fun. Kind of like telling the waiter that it’s your birthday every time you go to the restaurant.

But the most important thing that I can leave you with right now is that the world needs you right now. You are the ones who can help make the world make sense again.

It's no secret that the state of the public debate in our country has often been reduced to a cat fight between toddlers who are high on pixie sticks.

You can help change that. With your words, with all of the things you’ve been learning in all of your classes right in this building.

A world that seems like it's burning to the ground needs storytellers who know how to share accurate and responsible information across the many, many, many mediums available to share that information these days.

But most importantly. Doing all the things you are going to do to fix my generation and the generation before me's mistakes in this world are going to be fascinating for you.

You have this. You’ve got this. You're going to be amazing. 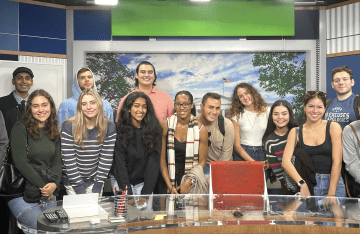