Dynamic Exploits: The Science of Worker Control in the On-Demand Economy

Who does on-the-job flexibility actually benefit?

On-demand service platforms (e.g., Uber, Lyft, Postmates and Caviar) recruit workers by promising on-the-job flexibility. Flexibility, however, is equally important to the firm: it justifies their classification of workers as independent contractors rather than employees. This designation has obvious financial benefits for companies, but it also introduces new challenges when workers’ decisions run counter to the firm’s needs. On-demand firms thus develop covert strategies to influence workers’ decision-making such that their choices conform to company interests. 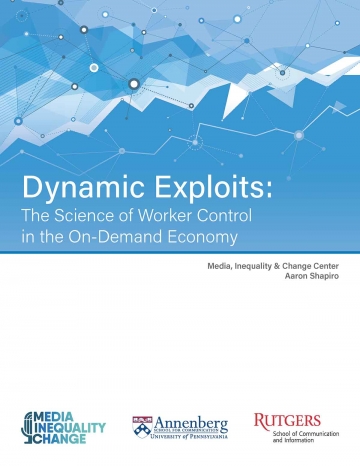 The most prominent of these control strategies involve dynamic pricing and dynamic wages. Understanding how such strategies work, however, is quite difficult; on-demand firms are notoriously opaque about their policies. To cut through this opacity, this report provides a critical review of an emergent literature in management science. This research constructs complex mathematical equations and computer simulations to model on-demand marketplaces; it then uses these simulations to evaluate various price and information manipulation strategies to maximize company revenue. The literature thus provides a unique window into companies’ exploitative calculus that has been neglected from critical analyses of the on-demand economy. The report concludes with recommendations for on-demand workers seeking to organize and demand fairer working conditions.

This paper was produced as part of the MIC Center’s call for research on technology, inequality, and information policy, designed to support new scholarship that explores the connections between inequality and technology with a specific focus on journalism, policy, work, and social movements. It is being released in conjunction with the MIC Center’s conference “The Platform Economy and the Future of the City” which is convening workers, activists, academics, and policymakers from around the globe in Philadelphia in order learn about how issues surrounding the Platform Economy are being addressed in other cities.

Aaron Shapiro is a postdoctoral research fellow with the MIC Center. He received an M.A. in anthropology and a Ph.D. from the Annenberg School at Penn. His research examines urban technology and inequality in the “smart city,” with a particular focus on public space, labor, and policing. His work has been published in Nature, Media, Culture & Society, New Media & Society, and Surveillance & Society, and his book, Design, Control, Predict: Logistical Governance in the Smart City, is under contract with the University of Minnesota Press.

Click here to view a PDF of the report.