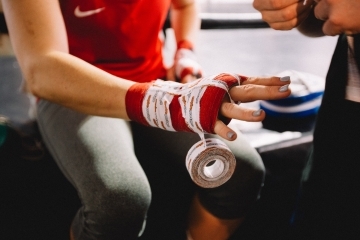 The first Annenberg C3 First Books event for Spring 2023 will be a discussion with Jennifer McClearen about her new book, "Fighting Visibility: Sports Media and Female Athletes in the UFC" (University of Illinois Press, 2021).

First Books is an initiative of the Annenberg Center for Collaborative Communication (Annenberg C3) directed by Professor Sarah Banet-Weiser and co-hosted by the University of Pennsylvania and University of Southern California’s Annenberg Schools for Communication. The series invites some of the most exciting new scholars from across the field of media and communication to share their work with the Annenberg community while also offering insights about the challenges and rewards that come with first-time book authorship. First Books has three aims: to celebrate and champion first-time book authors; to introduce members of the Annenberg community to path-breaking new texts in the field; and to help demystify the craft of book-writing by creating a space for dialogue and exchange between new authors, early career scholars and graduate students.

Equal parts seminar, book talk and launch party, First Books talks are open to all members of the Annenberg community: established authors, new authors and our many authors-to-be.

Over the promotion's first 20 years, the Ultimate Fighting Championship (UFC) doggedly excluded female athletes and upheld a long-standing sports media tradition of undervaluing and ignoring sportswomen. Ronda Rousey stormed onto the mixed martial arts scene in the early 2010s and persuaded the UFC to now promote women, ushering in a new fervor for female athletes in a male-dominated cultural milieu. The popularity of female fighters in the UFC may indicate that a notoriously impervious glass ceiling has been broken for female athletes in combat sports. Fighting Visibility: Sports Media and Female Athletes in the UFC cautions against the celebratory discourse of women's inclusion and urges supporters of women's sports to consider the limits of representation for cultural change.

Part cultural history of the UFC as a media juggernaut and part cautionary tale for the future of women as sports laborers, Fighting Visibility argues that the UFC’s promotion of diverse female athletes actually serves as a seductive mirage of progress that enables the brand’s exploitative labor practices. Despite being promoted to unprecedented levels, the UFC's labor model unfairly burdens female athletes, especially women of color and gender non-conforming women. Fighting Visibility complicates a prevalent notion among sports scholars, activists, and fans that the increased visibility of female athletes will lead to greater equity in sports media and instead urges us to question who ultimately benefits from that visibility in neoliberal brand culture.

Jennifer McClearen is an assistant professor of sports, media, and culture in the Department of Radio-Television-Film at the University of Texas at Austin. She is also affiliated faculty with the Center for Media and Entertainment Industries and the Center for Sports Communication and Media at UT Austin. Dr. McClearen’s research examines how networked sports media industries brand difference. She reveals how these institutions produce gendered, racialized, national, and sexual difference for consumption and sheds light on both the progress and pitfalls of those efforts. While her central objects of study are sports media, brand culture, and identity and representation, she grounds her work in intersectional feminist media studies and critical/cultural studies to alter the conventional ways we study sports media. She has published articles in journals such as Communication and Sport, International Journal of Communication, Feminist Media Studies, New Formations, Contiuum, and the Velvet Light Trap, among others, and published her first monograph, Fighting Visibility: Sports Media and Female Athletes in the UFC, with the University of Illinois Press in 2021.