The book examines how our digital footprints can help solve paradoxes that have long intrigued social thinkers.

Plenty of people on social media have an axe to grind, but why do some complaints become massive digital protests? Why do hashtags like #blacklivesmatter or #metoo become prominent in a matter of hours? How do trending topics emerge from the ever-shifting attention of the public?

These are some of the questions raised by digital technologies like social media and taken up by researchers and commentators alike. But as Annenberg School for Communication Assistant Professor Sandra González-Bailón argues in her new book, Decoding the Social World: Data Science and the Unintended Consequences of Communication (MIT Press), the digital trails we leave behind allow us to illuminate much more than social media hype. In the book, she writes that our digital footprints offer a crucial aid to solve some of the paradoxes that have intrigued social thinkers for centuries. 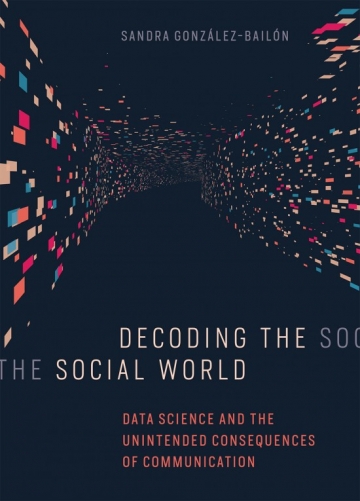 Prominent among them is the puzzle of unintended consequences.

“Our actions,” says González-Bailón, “are capable of causing outcomes that we never intended or even envisioned. This means that appealing to individual motivations can only give us so much information to understand the dynamics that we observe at the collective level — for example, the irruption of a new trending topic. We need to look at the bigger picture of how our individual choices fit together in a network of actions and reactions. This network was invisible not long ago but digital technologies have made it tangible and measureable.”

When digital movements organize, for example, they operate through communication networks that are leaderless and decentralized. However, the exchange of information soon results in structures that are highly hierarchical: visibility is concentrated around a few key actors. This is a paradox because none of the individuals involved aims at generating that outcome.

“Communication is key to understanding why those paradoxes are so prevalent in social life,” explains González-Bailón. “It is through communication that we influence each other and trigger the chain reactions that result in unintended effects.”

Digital technologies have opened a space for the kind of research social scientists could only dream of a few decades ago. However, they have also awakened old fears about the role that technologies play in social life.

“We think of the digital revolution as this pivotal historical moment that will change the course of humanity,” says González-Bailón. “But if we look at how older technologies were received, like the telegraph in the 19th century, there is a striking similarity in the metaphors we use to praise and condemn technological developments. As I write in the book, technologies change inexorably, but the reactions to them seem too human to evolve as fast — or to evolve at all.”

What has changed, the book argues, is our ability to look under the hood of old metaphors.

“This is where I see progress with respect to older revolutions,” says González-Bailón. “There is a sense of progression in the realization that we can now read aspects of social life that seemed encrypted before. Most importantly, we know that we are on the right track when we can point to new problems that we did not even know existed. Data is most interesting when it is used to quantify how much we don’t know. I hope the book inspires many readers to join the search for the answers that are still missing.”

Decoding the Social World: Data Science and the Unintended Consequences of Communication is published by MIT Press and can be found here.