Center on Digital Culture and Society

Signs of the Times: Public Displays at the Height of the COVID-19 Pandemic

From politics and the pandemic to Halloween and graduation, 2020 was notable for its proliferation of citizen signage. This photo essay provides a time capsule of the COVID-19 era in West Philadelphia.

Like so many people did during those days of fear and uncertainty that marked the first year of the COVID-19 pandemic, I brought home a puppy. A “cavachon” (Cavalier King Charles Spaniel and Bichon Frise mix), Matilda (“Tillie”) was eight weeks old when I got her in May 2020, and while she was potty training, she needed up to 10 walks a day.

It was frustrating for me to spend so much time of the day away from my computer, taking breaks that the diligent graduate student in me did not think I had earned.

But I took comfort in Tanya Behrisch’s “Slow” philosophy. In reference to the time she spent cooking for herself and loved ones, she explains:

“Rather than viewing those hours in neoliberal time as ‘lost hours’ I want to shift to a Slow appreciation of ‘gained hours.’ [...] Care work requires Slowing down, taking time to notice what should be done, for whom, when, and how. The Slow movement invites me to explore this relational process through research, writing, and embodied practice of cooking for others (p. 3).”

With this in mind, I realized my puppy would never be so young and impressionable again. Each day she got older, bigger, and more independent. Work would always be there needing my attention, but my precious fur baby would not.

Throughout some of the hardest and most stressful months of my life, I was cheered up by the fresh air, Tillie’s adorable sidewalk strut, and the messages my neighbors displayed in the windows, balconies, porches, and yards of residential buildings and storefronts. I began to consider the visual messaging on graffiti, memorial displays, flyers, and other citizen signage.

Between May and December of 2020, I took photographs of these displays on my iPhone as I walked Tillie through the streets of West Philadelphia, in particular the University City and Spruce Hill neighborhoods. You will find a gallery of these images below.

A Constellation of Issues

In a Slate.com article about the trend of posting signs in the early months of the pandemic, journalist Henry Grabar wrote, “Chicago is empty of people but full of signs [...] Every city is like this now, as if our protective masks stifled the ability to speak and left us to communicate only in writing.” 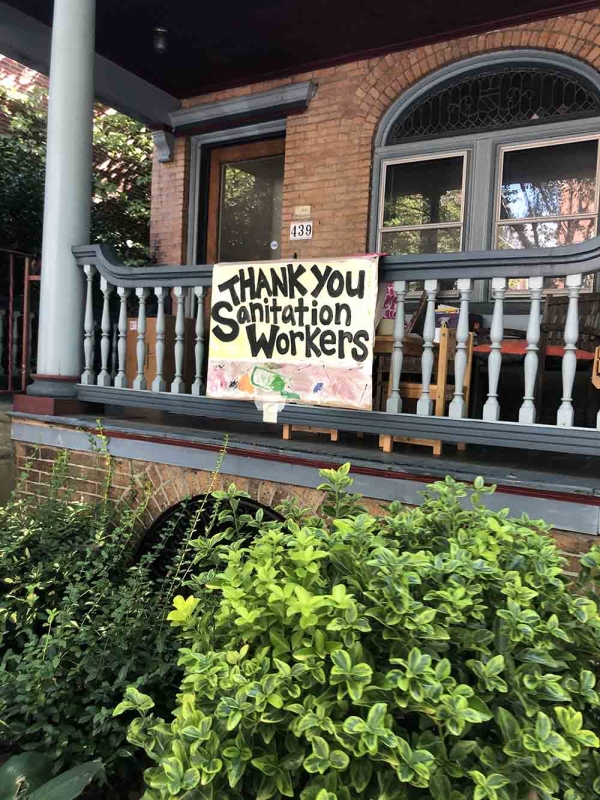 As those who lived through 2020 recall, there was no shortage of fodder for signage.

The pandemic coincided with a presidential election, which exponentially increased the degree to which people were displaying a national identity and concern.

Another significant percentage of the signs expressed “thank you” messages for essential workers who were continuing to leave their homes and risk COVID exposure to keep the community running. These were, at times, bright and uplifting artwork to demonstrate one’s positive outlook in the midst of crisis and tragedy.

As protests against racial injustice and anti-Blackness in the United States grew, many residents in my neighborhood displayed either homemade or commercially manufactured Black Lives Matter signs to demonstrate an intolerance for violence and discrimination against Black Americans.

Signs are both display and performance, a way that people articulate their definition of self as someone who takes public health seriously and is community-oriented.

Just as many of the themes overlapped, so too did the media. Images that were made by hand with markers or crayons and hung in windows may have also been photographed and uploaded to Instagram or Facebook. Similarly, the immediate intended audience might be passersby, but it could also be one’s own social media followers or the extended networks of anyone who walks by and takes a picture as I did, and now share with you in the gallery below.

As I took these photos, I thought about Erving Goffman’s 1959 book, The Presentation of Self in Everyday Life. It helped me to see the signs as a means of performing identity, gratitude, care, and allyship. This is not to say that the displays are not genuine, but rather that they are calculated and intentional attempts to put forward into the world an image of oneself through a visual. Goffman writes:

“The individual may attempt to induce the audience to judge him and the situation in a particular way, and he may seek this judgment as an ultimate end in itself, and yet he may not completely believe that he deserves the valuation of self which he asks for or that the impression or reality which he fosters is valid (p. 21).”

Indeed, I saw many signs that seem to have been made and displayed in order to have an audience “judge” (in a positive sense) the person or household sharing that message or “performance.” I imagine that some of my neighbors hoped to be viewed by passersby as anti-racists or feminists or Biden/Harris supporters.

As Goffman suggests, however, many might have found that even after creating the display of care or identity they still felt guilty or insecure about their place in our deeply flawed society. This was certainly true of myself.

Performative allyship has been critiqued widely as a phenomenon wherein people seek attention for their support for justice without doing actual justice work. While I recognize this problem, I can also see merits to the displays of allyship in this context. After all, performing allyship is not in itself a problem, if accompanied by action. 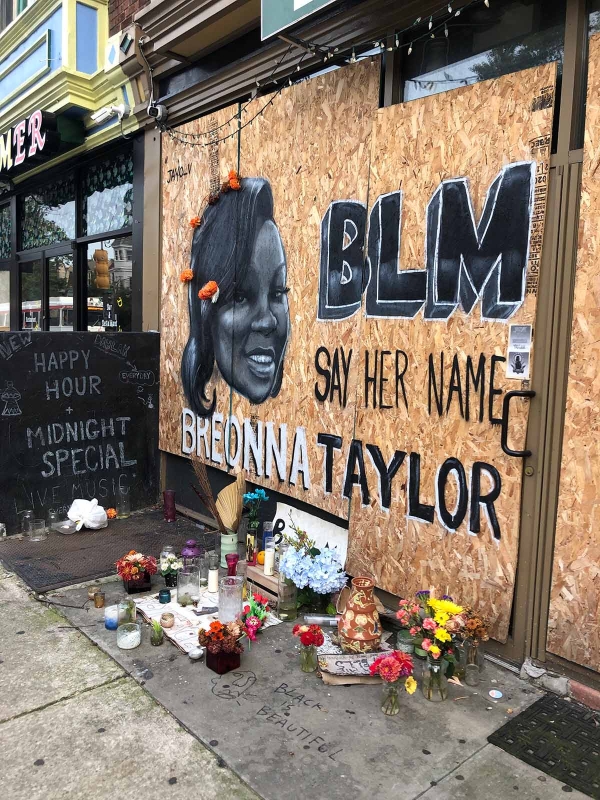 As a new member of the community, it was comforting and affirming to see my neighbors’ values on display through this signage. While I recognized the many problematic ways that people have engaged in virtue signaling, in this case, I wanted my neighbors to signal their virtues to me. If I wanted to know, for example, that it was safe to wear my Pride shirt around the neighborhood, I could find my answer in many of the signs displayed by my neighbors.

I thought about the labor and care people took to make homemade signs, though this does not necessarily point to further social action. I also thought about how it would be easy to judge someone for simply displaying a commercially made sign, though at times those signs come as a result of a donation to a justice organization. In this case, people displaying them have “put their money where their mouth is” and directly supported the cause.

Assigning motivation was, of course, impossible. In these times of social distancing, I was unable to pair the displays of allyship through signage with discussions with the creators about their social justice work. It was also not clear which signs came from allies and which came from people directly impacted.

While lawn and window signs are common every election season, I do wonder if there was an increase in signage to compensate for the loss of other forms of political identity and candidate support during physical distancing. For example, people who usually wear campaign t-shirts, pins, and hats might have instead opted for a sign that they could display from the safety of their home, while still reaching an audience.

The signs were also a reflection of our local political leanings. The prevalence of Black Lives Matter, Biden/Harris signs, and COVID-19 safety signs was notable in the absence of signage in support of police, the Trump/Pence administration, or claims that COVID-19 was a hoax to be ignored.

The few times I left the community this summer I found myself in areas with large numbers of Blue Lives Matter products, signs demanding that the government reopen restaurants and shops, and Trump 2020 flags.

The difference in my degree of safety and comfort as a queer woman of color was palpable in those communities versus in my own, and I was proud to see the intolerance of racism, homophobia, and other forms of discrimination on display amongst West Philadelphia residents — acknowledging, of course, that these generalizations do not apply to all residents. 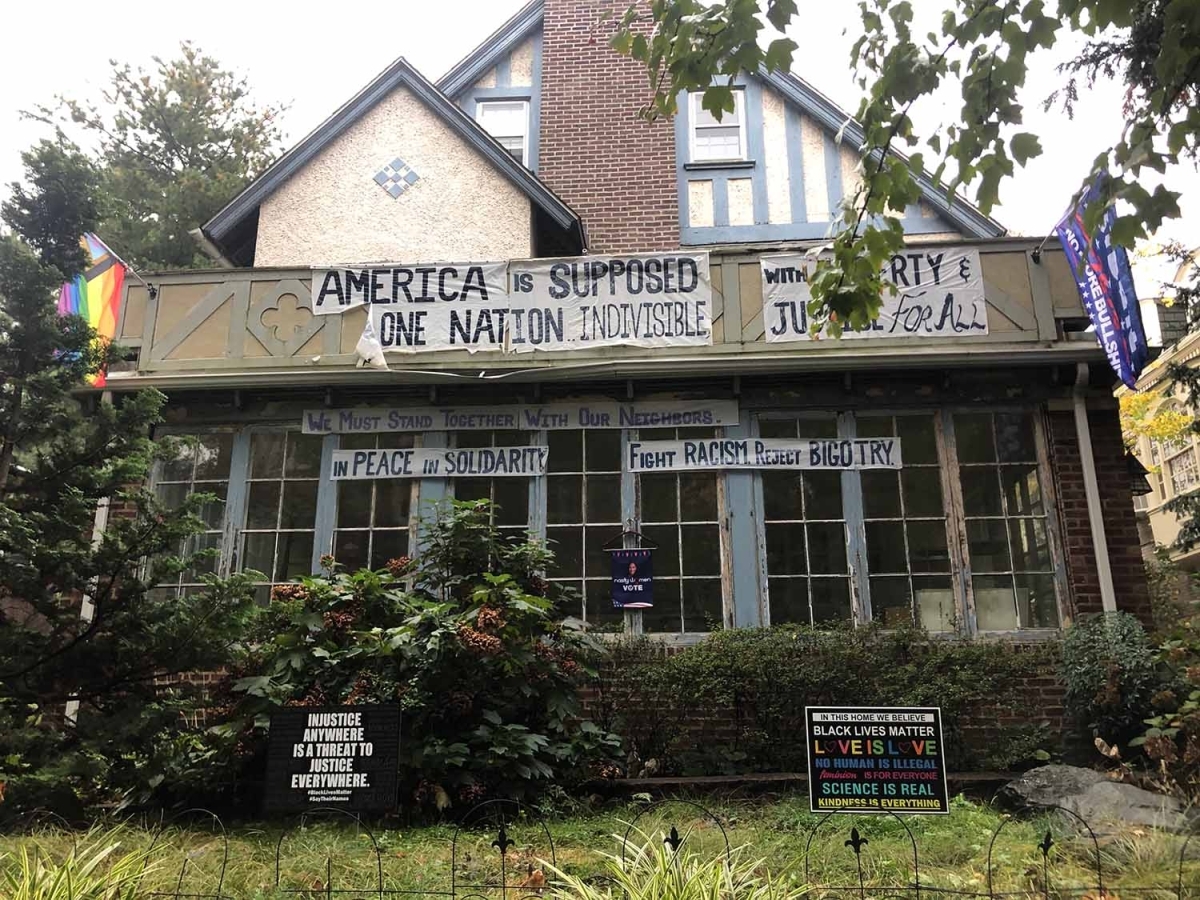 Another thing that caught my attention were the contrasts in subject matter. While people were mourning the loss of lives and experiences due to COVID-19 and white supremacy, people were also celebrating graduations and holidays. Once mundane Halloween decorations such as tombstones and skeletons took on a new meaning for me when I encountered them during a period of mass death.

While people were calling for police abolition, they were also expressing gratitude for postal and sanitation workers who had been working through frustrating budget cuts and high COVID-19 risk.

The images also demonstrated the ways in which mundane and regular tasks persisted even throughout the COVID crisis. People continued to grab coffee at the local café, get their flu shots, and wash their clothes at the laundromat, even as the logistics of these tasks changed greatly.

Although many photographs below captured similar displays, no two photos are identical. Even when signs were exactly the same in content, they varied in terms of placement, materiality, size, and many other factors.

This collection is useful even in 2020 as a way to understand West Philadelphia residents in 2020, and it will likely be even more valuable in future years as a time capsule. While I took these photos without asking for permission, I hope that by sharing them, I am honoring the West Philadelphia community that gave me a warm welcome and offered me a home during some of the most difficult months of my life.

Kelly Diaz is a doctoral candidate at the Annenberg School for Communication.

Use the arrows to scroll through photos taken by Kelly Diaz on her iPhone between May and December of 2020.