Leigh is a third-year student in Communication and Political Science.

Tyler Leigh has always been interested in politics. Growing up in Alpharetta, Georgia, he watched a lot of political news television with his parents, and as a 7-year-old, he remembers trying to understand the political implications of the aftermath of September 11, 2001. In middle school, he liked to read political books, marking the passages he found most intriguing, and was often seen carrying a copy of Ann Coulter’s If Democrats Had Any Brains, They’d Be Republicans.

It was an interest that stuck.

Today, Leigh is a third-year doctoral student at the University of Pennsylvania, pursuing a joint Ph.D. in Communication and Political Science. His research interests are focused on understanding how people think and talk about politics, and how their social contexts factor in.

One of the reasons Leigh is so interested in this line of study is because he doesn’t fit the mold, politically speaking. Conventional wisdom says that, based on his upbringing in conservative social circles in the South, Leigh should have conservative values. But as a teenager and young adult, he began to question the values and ideas that surrounded him. That got him wondering: what factors impact the political ideology people adopt as their own, and is it more complicated than simply how one grew up?

“I really want to understand people’s experiences of politics: how they think about it, how they talk about it, and how social structures and institutions impact it all,” says Leigh. “I’m particularly interested in media, especially social media, and how it’s changing the ways we think about other people’s politics and the ways we present our own.”

Along with his advisor, Professor Diana Mutz, Leigh is currently involved in a research project that investigates whether social media use leads to increased political polarization. By studying the same people over time, the researchers can track how using Facebook, Twitter, Instagram, and YouTube impacts how polarized the participants are. Preliminary findings suggest that frequent social media users are more polarized than people who are less active on social media platforms, and that changes to how frequently a person uses social media are associated with changes in the same person’s level of polarization.

Leigh is also studying how Democratic voters chose which candidate to support in the 2020 Democratic presidential primaries, asking questions about their preferred candidates and their voting strategy (or lack thereof); how Republicans’ and Democrats’ attitudes toward different policies and government institutions change based on whether their party controls the presidency; and the connection between increasing levels of political polarization in Congress and shifts in how Congresspeople speak to one another over time. (The first two studies are collaborations with Mutz, and the third is a collaboration with Abigail Dym, a Penn graduate student studying Political Science and Education.)

Leigh enjoys the ability to pursue a broad array of interests, and is grateful for the joint doctoral program. Although it’s more work — requiring six years, twice as many courses, and commitments to more than one department — the joint Ph.D. in Communication and Political Science allows Leigh’s research to be informed by a variety of disciplines and approaches, which he believes is a huge benefit.

“I identify as a political scientist,” Leigh says, “but most of my research is, at its core, informed by both Political Science and Communication. Penn was my dream school because of the joint program and the opportunity to have my work expanded, rather than limited.”

In addition to his research, Leigh has served on many Annenberg student committees, including Graduate Student Council, the Graduate Student Events Committee, and the Professional Development Day planning team. In 2019, he co-organized a workshop for Communication and Political Science graduate students who study political communication, even if not in the joint degree program, to share and discuss their work.

As part of his involvement in planning activities for his fellow graduate students, he once found himself convincing his fellow students that the peach cobbler they were preparing, did, in fact, need more butter. “I had to say, ‘Look, I am from the South, and I know cobbler, and half a stick of butter isn’t going to cut it,’” says Leigh, an occasional baker. “They eventually agreed to add more, and then everyone couldn’t stop talking about how delicious it was.”

Leigh also serves as a teaching assistant for Political Science courses. Most recently, he was a TA for PSCI 230: Public Opinion and American Democracy, taught by Political Science associate professor Michele Margolis. Leigh has always loved teaching — he got his start as a swimming and lifeguarding instructor — and says it’s one of the things that drew him to academia.

After graduation, Leigh hopes to become a professor, so he can continue to pursue research and teaching. But if that doesn’t work out, maybe he’ll pursue his other dream job, which may or may not exist yet: TikTok’s resident political scientist. 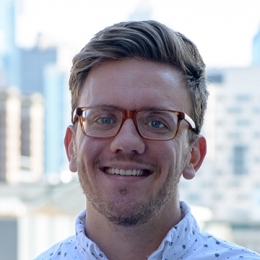 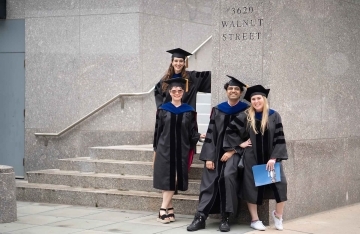 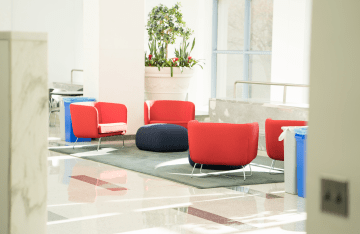