New Book by Marwan Kraidy: The Naked Blogger of Cairo

As uprisings consumed the Arab world from 2010 to 2012, there was a worldwide scramble to understand the events, their causes, and their implications. Over the next several years, many commentators pointed to technology and social media, casting them as the key change agent in the people’s quest for popular sovereignty.

But that didn’t ring true for Annenberg Professor Marwan Kraidy, who has been researching connections between Arab media, politics, and culture for more than 20 years — three of his previous nine books relate to the subject. Technology is a tool in the spread of ideas, but Kraidy felt that at the heart of the Arab Spring was ultimately something more human. 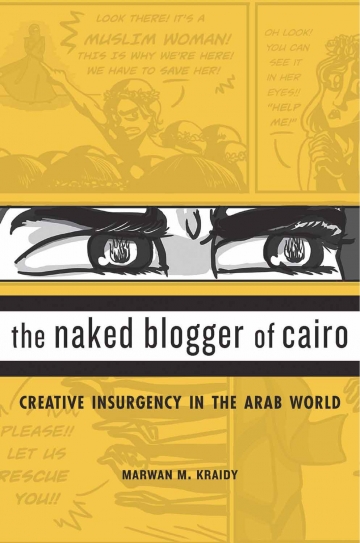 To explore the issue, he spent five years collecting and poring over primary sources and spent 13 months living in the region. What emerged was The Naked Blogger of Cairo: Creative Insurgency in the Arab World, his tenth and newest book exploring the creative insurgency behind the Arab Spring: its self-immolations, graffiti, puppetry, videos, slogans, and satire.

What Kraidy found by looking at so many manifestations of protest is that at their core, they had one thing in common: the human body.

The body literally can be an instrument of protest as people taking to the streets and stand up to authority. In what Kraidy calls “radical insurgency,” protesters put their bodies at risk by measures like self-immolation, standing in front of a tank or armed authorities, or going on a hunger strike.

“This is where you are saying, ‘I’m willing to risk my body and my life for a cause that’s bigger than myself,” says Kraidy.

Depictions of the body also serve as powerful symbols of protest in a more gradual creative insurgency.

Artists used satire in attacks on the body politic, for example reducing Syria’s Bashar al-Assad into a hapless finger puppet for a series of online videos or depicting Egypt’s Hosni Mubarak in the style of a laughing cow, playing off a brand of cheese.

“In the book, I make the argument that creative insurgency uses the body as a physical medium and a symbol to separate the biological body of the dictator from his political body,” explains Kraidy. “Once you do that, you lower him down from a pedestal and turn him into an ordinary person, therefore no longer dangerous or deadly.”

The book is structured as 38 short essays of two to five pages each, offering accessible vignettes of vivid, compelling characters in the Arab Spring.

The book’s title character, the Naked Blogger of Cairo, is Aliaa al-Mahdy, a blogger and Communication student from the American University in Cairo who famously posted a full frontal nude photo of herself online, along with her political beliefs.

“It created a huge scandal,” says Kraidy, “and one of the things that scandal does is to bring clarity to a political struggle. Every political actor in Egypt then had to make a statement about it, and so some people who had been silent became vocal about their political views and agendas.”

Other characters in the book include Sprayman, a mythical character who sprays graffiti at night; Captain Khobza (Captain Bread), a super hero fighting the hunger and poverty caused by corruption, pillage, and repression; and Qahera, a Muslim feminist superhero who lassoes Western activists who want to “save” Muslim women.

Says Kraidy, “What all of these people do is they show one basic thing: When you turn your own body into an instrument of political struggle, and you do it well in a way that makes it visible that compels people to pay attention, then you can achieve things that you otherwise could not.”

The Naked Blogger of Cairo is available now from Harvard University Press and will be available widely on June 6.