Participants lacked understanding of how near-constant mobile internet use potentially compounds other inequalities in their lives.

A new report from the Media, Inequality and Change (MIC) Center details the kinds of online privacy tradeoffs that disproportionately impact cell-mostly internet users — who are likely to be Black, Hispanic, and/or low-income.

Researchers Jan Fernback and Gwen Shaffer facilitated focus group discussions with 79 people in Philadelphia and Long Beach, California all of whom rely on their phones to go online. Through participant observation, the researchers also gained insight into the most popular apps for cell-mostly internet users and how much time they spend engaging with them.

The sentiments expressed by these cell-mostly internet users are not unique. Nearly all study participants shared stories of relinquishing their data privacy, which the researchers consider to be a basic human right, in exchange for the ability to access online services and platforms. Many people shared anecdotes about forgoing opportunities in an attempt to maintain data privacy.

However, participants lacked a clear understanding of how near-constant mobile internet use, including dependence on internet-connected apps, potentially compounds other inequalities that exist in their lives. Rather, study participants generally seemed resigned to their status as having little power and minimal social capital.

“Our findings shed light on the added dangers to information privacy that lower-income, cell-mostly internet users face, and how those dangers shape their online behaviors,” Fernback said. 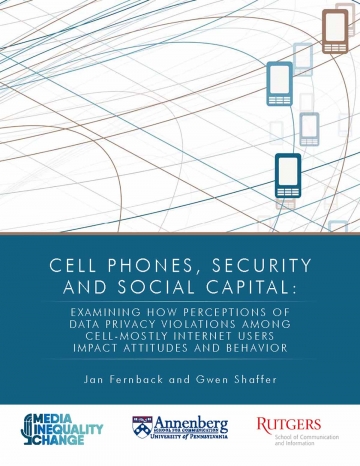 All individuals are vulnerable to security breaches, identity fraud, system errors, and hacking. But economically disadvantaged individuals who rely exclusively on their mobile phones to access the internet are disproportionately exploited through leakier phone models, lack of knowledge about phone security practices, and attitudes of resignation with regard to their agency over their own data. Such users are also more open to governmental surveillance if they participate in programs for low-income individuals and families or live in subsidized housing.

“The smartphone-dependent people we interviewed typically did not own a computer, and many lacked stable housing and relied on public services,” said Shaffer. “Unfortunately, members of disadvantaged populations are frequent targets of data profiling by retailers hoping to sell them cheap merchandise or bait them into taking out subprime loans. They may be charged higher insurance premiums or find their job applications rejected. Ultimately, the inequities they experience off-line are compounded by online privacy challenges.”

The researchers argue that privacy is a public good and a fundamental value in a democratic society. In fact, it is a requirement of basic human dignity. Because of the sheer ubiquity of digitized data compiled on individuals who rely on cell phones to access the internet, the need for privacy should be elevated from a personal liberty and legal right to a matter of social justice. Data privacy is not a luxury for those who cannot afford to invest the time, resources, and effort required to actively protect one’s digital assets.

This study underscores the need for U.S. citizens, lawmakers, and activists to further consider the grassroots impact of data privacy and security and includes sets of recommendations at the policy, individual, and consumer advocacy levels. Understanding the symbiotic relationship between the material nature of mobile technology and the social construction of technology is a key means to safeguarding privacy in our increasingly digital lives.

The report is entitled “Cell Phones, Security and Social Capital: Examining How Perceptions of Data Privacy Violations among Cell-Mostly Internet Users Impact Attitudes and Behavior” and is available here.