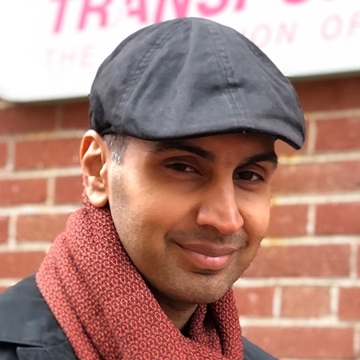 Murali Balaji is a journalist, author, and academic with over 20 years of experience in diversity leadership. He is the founder of Maruthi Education Consulting and has consulted numerous nonprofits, government agencies, corporations, and political campaigns on diversity, equity, and inclusion issues. Balaji has also served as the education director for the Hindu American Foundation, where he was recognized as a national leader in cultural competency and religious literacy. He co-founded The Voice of Philadelphia, a non-profit geared to help high school dropouts (or pushouts) develop media literacy and citizen journalism skills. He has also been a professor at Temple University and Lincoln University, where he chaired the mass communication department and engaged in multi-method research.

His areas of research include political economy, race and media, and the connections between masculinity and nationalism. He worked as a journalist for nearly a decade, covering politics, sports, and demographic changes. He won an Independent Press Association of New York award for covering racial justice issues and was honored by the St. Paul City Council for his work on covering policy issues.

He is a certified anti-bias trainer through the Anti-Defamation League (ADL). He also serves as the board chair of Bhumi Global and on the national board of Americans United for Separation of Church and State, as well as on the national advisory board of the Religious Freedom Center of the Freedom Forum Institute. His work has been featured in publications such as Teaching Tolerance and Religion Dispatches.

The Professor and the Pupil: The Politics and Friendship of W. E. B. Du Bois and Paul Robeson. Nation Books, 2007.

WHYY: How is Diwali celebrated differently in India and the U.S.?

WHYY: Both Parties Have Important Lessons to Learn from Election Day