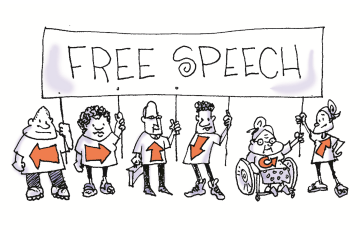 This event will be held via Zoom at upenn.zoom.us/my/ascmedarisk. Questions for Q&A should be submitted via the chat function.

Democracies are struggling to balance freedom of expression with equality for the weak as well as accountability for harmful speech. There is growing alarm at how internet giants distort the marketplace of ideas, undermine human dignity and derail truth-seeking — but little consensus on what should be done. Can we still have faith in the liberal axiom that the answer to bad speech is more speech? Or will more regulation help? Our virtual roundtable features Pulitzer-winning editorial cartoonist Signe Wilkinson and media anthropologist Sahana Udupa, who studies digital hate, in conversation with media scholar Cherian George.

Cherian George is professor of media studies at Hong Kong Baptist University’s School of Communication and Film, where he also serves as associate dean for research. He researches media freedom, censorship and hate propaganda. His books include Hate Spin: The Manufacture of Religious Offense and its Threat to Democracy (MIT Press, 2016). He received his Ph.D. in Communication from Stanford University. Before joining academia, he was a journalist with The Straits Times in Singapore.

Sahana Udupa is professor of media anthropology at LMU Munich, Germany, where she leads multiyear research projects on digital politics, online extreme speech and artificial intelligence funded by the European Research Council, and a multimedia project on online nationalism funded by the Henry Luce Foundation. She is currently a Joan Shorenstein Fellow at the Harvard Kennedy School. She is the author of Making News in Global India: News, Publics, Politics (Cambridge University Press, 2015). Her latest publications include the UN research paper on digital technology and extreme speech and the co-edited volume Digital Hate: The Global Conjuncture of Extreme Speech (2021, Indiana University Press).

Signe Wilkinson began her nearly 40-year career as a full time editorial cartoonist at the San Jose Mercury News in 1982. In 1985, she moved to the Philadelphia Daily News and, later, The Philadelphia Inquirer. Along the way, she was President of the Association of American Editorial Cartoonists (1994-95) and has received awards including the Pulitzer Prize, four Overseas Press Club Awards and two Robert F. Kennedy Awards. Her recent publications include the 2019 "Herstory: 19 Cartoons Celebrating the 19th Amendment" and she drew the cartoons supporting UPenn professor Jonathan Zimmerman's robust defense of unfettered expression, "Free Speech and Why You Should Give a Damn," published earlier this year.

Catering to the Interests of the Richest or Staunch Fighters for Social Justice? A Long-term Perspective on Media Discourses of Economic Inequality in the U.S. Press