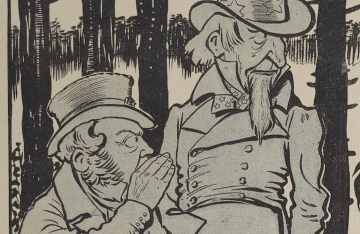 Conspiracy Theories and Political Culture, Past and Present

Join Adrienne LaFrance, executive editor of The Atlantic and James McAuley, The Atlantic contributor and author of The House of Fragile Things, a history of Dreyfus-era France, for a conversation around the long history of conspiracy theory and its role in political culture, then and now. The discussion will be moderated by Sophia Rosenfeld, Walter H. Annenberg Professor of History at Penn.

The talk is part of the Penn Libraries' Lorraine Beitler Collection of the Dreyfus Affair Distinguished Lecture Series. The Annenberg School for Communication is a co-sponsor.

This event will be held remotely, via Zoom. Link information will be provided to registrants. The event is free and open to the public.

Register for this event

Adrienne LaFrance is the executive editor of The Atlantic. She was previously a senior editor and staff writer at The Atlantic, and the editor of TheAtlantic.com. Adrienne’s background is in investigative reporting, and she has written about the intersection of politics, media, technology, and information systems for more than 15 years. She is the author of "The Prophecies of Q" (The Atlantic, June 2020).

James McAuley, a Global Opinions contributing columnist at The Washington Post focusing on French and European politics and culture, is a former Paris correspondent for the Post. He holds a PhD in French history from the University of Oxford, where he was a Marshall Scholar, and a BA in history and literature from Harvard University. In addition to writing for The Atlantic and the New York Review of Books, he is the author of The House of Fragile Things, a history of Dreyfus-era France, published by Yale University Press in May 2021. He is also the author of the recent article "France Knows How this Ends" (The Atlantic, January 19, 2021).

Sophia Rosenfeld is Walter H. Annenberg Professor of History at the University of Pennsylvania. She is the author of several books, including Democracy and Truth: A Short History (2019) and Common Sense: A Political History (2011), which won the Mark Lynton History Prize and has been translated into many languages.  She also writes regularly for publications like The Nation, as well as many scholarly outlets.  She was previously Vice President of the American Historical Association and has held fellowships from the Institute for Advanced Studies in Princeton and the Guggenheim Foundation, among others. She is currently co-editing a six volume cultural history of ideas from antiquity to the present.

New Directions in Feminist Thought: Research in Times of Crisis and Change