Trust that the U.S. Supreme Court is operating in the best interests of the American people has plummeted.

Trust that the U.S. Supreme Court is operating in the best interests of the American people has plummeted amid growing perceptions that the justices are partisans just like any other politicians, according to the latest Annenberg Public Policy Center survey, which includes questions tracking the court across more than a decade and a half.

The survey, which was conducted in August, two months after the Supreme Court overturned the 49-year-old Roe v. Wade ruling guaranteeing a constitutional right to abortion, finds that 53% of U.S. adults disapprove of how the court handles its job. The survey also reveals a chasm between the qualities the American people say they value most in judges, such as fairness and impartiality, and the traits they perceive in Supreme Court justices.

In most of the years the policy center has conducted this survey, differences in trust in the court by party affiliation have not been meaningful. That changed in 2022, with a wide gap separating Republicans from Democrats and independents on some attitudes toward the court.

“Whether the perceptions registered in our survey are justified or not, they are worrisome,” said Annenberg Public Policy Center Director Kathleen Hall Jamieson, who has directed the survey since its inception in 2005. “For the court to play its role in our system of government, it is important that it be perceived to be an independent branch that impartially and fairly bases its decisions on the Constitution, the law, and the facts of the case.”

The Supreme Court questions were part of the Annenberg Constitution Day Civics Survey, a nationally representative survey conducted annually for Constitution Day (Sept. 17) by the Annenberg Public Policy Center (APPC) of the University of Pennsylvania. The 2022 survey of 1,113 U.S. adults was conducted by phone for APPC by independent research company SSRS on August 2-13, 2022. It has a margin of error of ± 3.6 percentage points at the 95% confidence level. The year-to-year changes reported here are statistically significant unless noted otherwise. Analyses were conducted by APPC research analyst Shawn Patterson Jr., Ph.D.

For the questions and additional data, see the Appendix and Methodology statement. Findings on civics knowledge were previously released for Constitution Day.

The survey found that:

The findings come as the court begins its fall term amid growing concerns about trust in the court. In a speech last month in Colorado Springs, Colo., Chief Justice John G. Roberts Jr. defended the integrity of the court. “The court has always decided controversial cases and decisions always have been subject to intense criticism and that is entirely appropriate,” Roberts told judges and lawyers. “You don’t want the political branches telling you what the law is. And you don’t want public opinion to be the guide of what the appropriate decision is. … But simply because people disagree with an opinion is not a basis for criticizing the legitimacy of the court.”

The findings are consistent with data in other recent surveys using similar questions. A Gallup poll in September found 47% of U.S. adults have a great deal or a fair amount of trust in the Supreme Court, while a Marquette Law School Poll found the court’s approval rating at 40%. 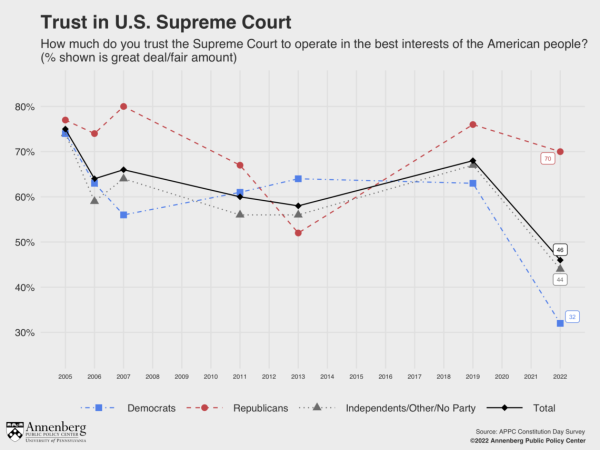 Reining in the Supreme Court

In a series of questions, large numbers of Americans feel that the Supreme Court gets “too mixed up in politics” and favor limiting the Supreme Court’s jurisdiction or independence, nearly all on a par with prior years or increasing:

Stripping jurisdiction from the Supreme Court

On questions of stripping the Supreme Court of jurisdiction or abolishing it altogether, responses by party in this survey have usually not differed significantly. Again, that changed in 2022, when 51% of Democrats but only 21% of Republicans agreed with the statement that Congress should pass legislation to limit the court’s jurisdiction if Congress disagrees with the court’s decisions. 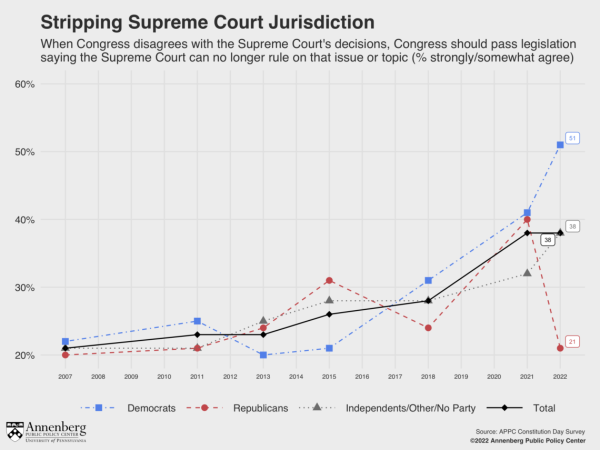 Over 1 in 4 Democrats (27%) and independents/other/no party (29%) agreed that if the court started making a lot of rulings that most Americans disagreed with, it might be better to do away with the court altogether. Just 15% of Republicans agreed with this. 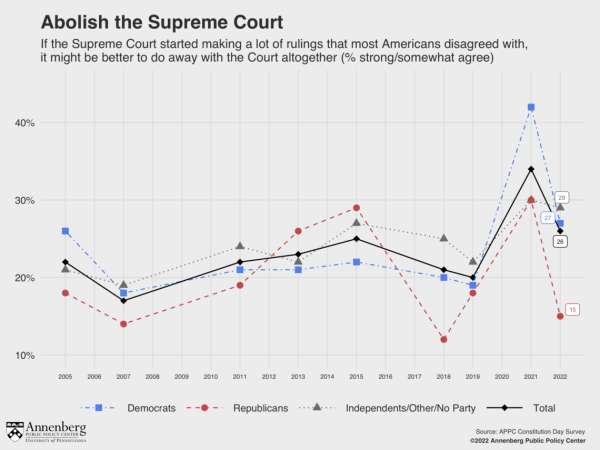 Partisanship, ideology and the court 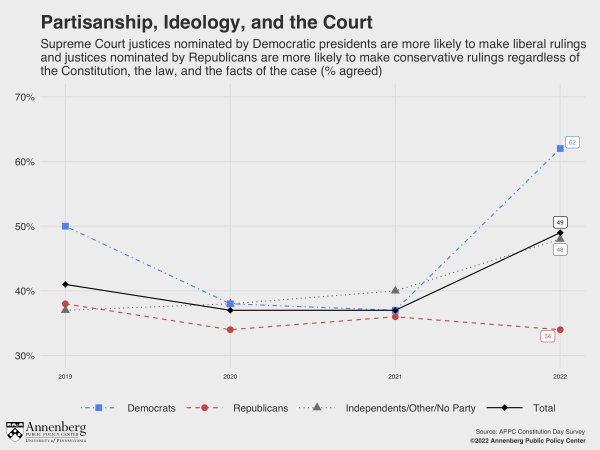 What Americans value in judges

The survey noted that in some states, state and local judges are elected. Respondents were given a choice of different qualities and asked how important each would be in deciding whether to vote for a candidate for judge. Respondents said the most essential/very important qualities are that a judge:

Those responses did not change significantly from 2019.

The abortion ruling – and increasing the size of the court

Abortion: On June 24, 2022, the Supreme Court ruled in Dobbs v. Jackson Women’s Health Organization that there was no constitutional guarantee of a right to abortion, overturning the Roe v. Wade decision recognizing such a right. The Dobbs ruling is widely unpopular among U.S. adults:

Increasing the size of the court: The survey also asked Americans what they thought of proposals to increase the number of justices on the Supreme Court – a proposal that some Democrats and left-leaning critics of the court have said would restore ideological balance to it. In the survey, a plurality of respondents opposed such a proposal: