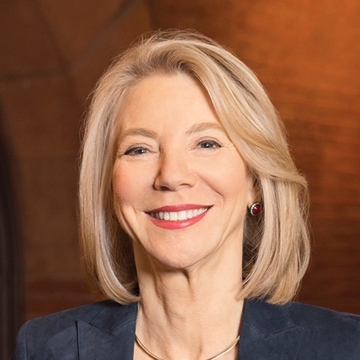 Amy Gutmann’s scholarship focuses on the value of education and deliberation in democracy; the importance of access to higher education and health care; the “good, the bad, and the ugly” of identity politics; and the essential role of ethics in public affairs.

Amy Gutmann was the eighth president of Penn, serving from 2004 until she was confirmed U.S. Ambassador to Germany in 2022. Named by Fortune in 2018 as one of the “World’s 50 Greatest Leaders,” Gutmann is renowned for championing affordable access to education and health care, innovative discoveries that save lives and propel economies forward, global engagement, and public-private partnerships.

First in her family to graduate college, Gutmann has made affordable educational access a top priority, more than doubling the number of students from low-income and first-generation college families at Penn, the largest U.S. university offering all-grant financial aid that meets the full need of undergraduates.

Global engagement also has been a centerpiece of Gutmann’s presidency, highlighted by the creation of the Perry World House on campus, Penn Wharton China Center in Beijing, and the Penn Biden Center for Diplomacy and Global Engagement in Washington, D.C.

Appointed in 2009 by President Barack Obama, Gutmann chaired the Presidential Commission for the Study of Bioethical Issues for seven years, publishing 10 reports on major issues including preventing and responding to public health crises. Gutmann also is an award-winning author and editor of 17 books, including Democratic Education, The Spirit of Compromise (Princeton University Press, 2012) and Everybody Wants to Go to Heaven but Nobody Wants to Die: Bioethics and the Transformation of Health Care in America (Liveright, 2019) with an Afterword on Pandemic Ethics for the paperback edition.

Gutmann serves on the Board of Vanguard (since 2006), the Berggruen Institute (since 2014), and the America 250 Semiquincentennial Commission. She served as Chair of the Association of American Universities (2014-15); on the Board, Executive Committee, and as Chair of the Liberty Medal Committee of the National Constitution Center (2007-19); and as a member of the Knight Commission on Trust, Media, and Democracy (2017-19).

Gutmann has received many honors for her leadership. Among them, she was honored in 2019 with both the William Penn Award and the Pennsylvania Society’s Gold Medal for Distinguished Achievement.

Before Gutmann’s appointment at Penn, she was Provost and Laurance S. Rockefeller University Professor at Princeton University, founding director of the University Center for Human Values, and recipient of the President’s Teaching Award.