Engaging undergraduate students in a public service dialogue through a special program combining individual research opportunities with hands-on experiences in the public arena. Students meet with and learn from current and former public office holders, journalists, and public servants.

The Institute for Public Service (IPS) was established in 2003 thanks to a grant from the Annenberg Foundation. Its aim is to promote research in politics and communications and to expose students to political and communications practitioners through special undergraduate course offerings taught by lecturers – and often featuring notable visiting speakers – and by underwriting public-service oriented internships.

The program has been developed under the guidance of David Eisenhower, who has been the director of IPS since its inception.

Another of the IPS courses which has been taught since 2003 is journalist Albert Hunt’s COMM 323: Contemporary Politics, Policy, and Journalism. Not only does Hunt himself have decades of experience working at the nation’s leading political news outlets, but the class also hosts an extensive list of guest lecturers from the worlds of print and television journalism.

Every four years – with 2020 excepted, due to the pandemic — Eisenhower has also taught COMM 428: Conventions, Debates and Campaigns with former journalist and U.S. House Representative Marjorie Margolies. This course allows its students to travel to both the Republican and Democratic National Conventions, visiting the convention floor each night and meeting with a variety of well-known politicians and journalists each day. Watch a video here about the class, filmed during the 2016 Democratic National Convention in Philadelphia. After the presidential election, a seminar focuses on the first 100 days of the newly elected administration.

Past course offerings have included courses on the courts and Congress.

Due to the pandemic in 2020 and 2021, IPS-sponsored travel for courses and internships was cancelled. We very much look forward to the return of the rich, in-person experiences that have been the hallmark of IPS. 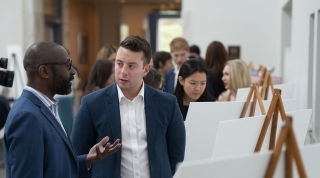 ComPS offers undergraduates interested in public service the ability to customize their major with research opportunities and hands-on experience in the public arena.

More in Institute for Public Service